How tech is finding its position in football

World Cup 2018. Twas the Summer that football came home; sun-drenched months where Southgate was the one, and the world drank so much alcohol it caused a CO2 shortage.

There were shocks aplenty. The world's top two players were left trophyless and returned to their respective home nations before July arrived.

Spectators across Russia were even kindly left unassaulted by hooligans, contrary to the narrative pushed by British media in the years leading up to the spectacle.

But despite all the entertaining games, Jules Rimet heading back to France and the glowing reviews from those who did travel, it was technology's positive impact on the World Cup that left us most impressed. Here, we'll cover some of the most impressive uses of tech in the football, and identify the areas that are ripe for further improvement.

Believe it or not, creating a football isn't as easy as it looks. We've come a long way from the days of playing with the bladders of sheep or pigs, but previous World Cups have been marred with criticisms of the leather spheres.

Take the infamous 2010 Jabulani ball, for example. Universally detested by goalkeepers, the ball was incredibly described as 'too perfect' a sphere to fly straight following studies from the Institute of the Science of Movement in France. 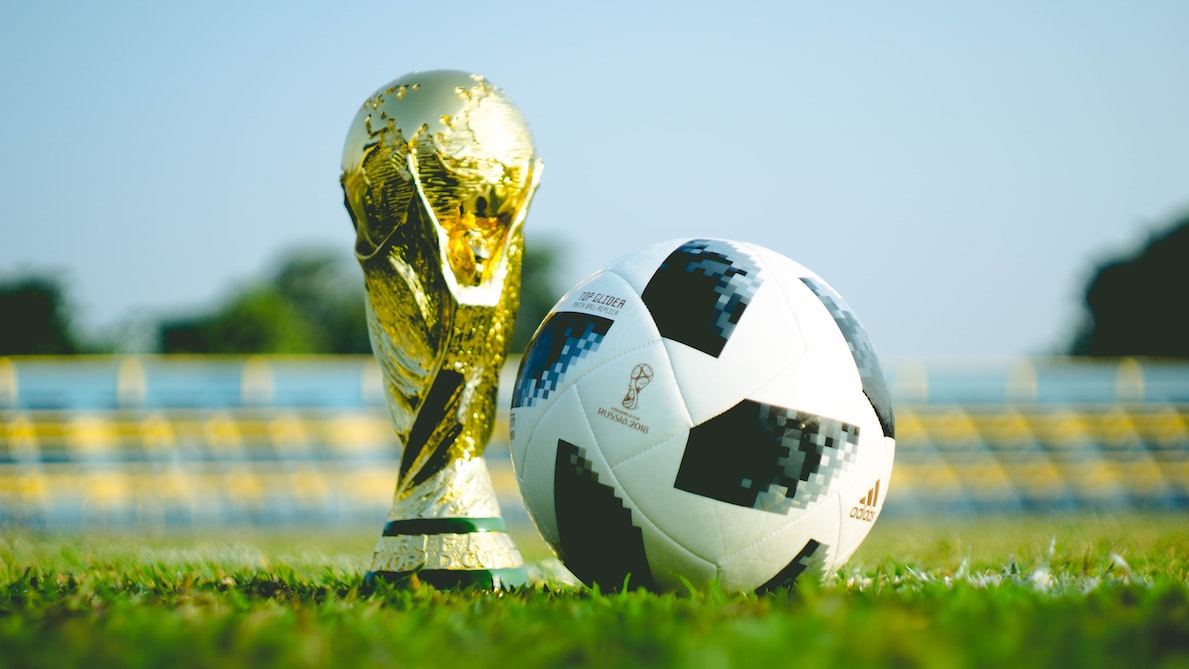 Such controversy caused Adidas to put their latest orb, the Telstar 18, through rigorous wind tunnel testing prior to release. The ball went mostly unnoticed through the tournament, which is as good a testimony as any. Eagle-eyed viewers may have noticed some instances of the ball bursting, which may be explained by the analysis of Inside Science, who note that their testing didn't allow for examination of the ball's elasticity.

With panels shaped like helicopter propellers to aid flight stability and extensive testing preventing the ball from becoming a talking point or an enemy of the world's finest shot-stoppers, there is plenty to be in awe of from a design perspective. But it's the technology inside the ball that left us dazzled.

Found in any Telstar 18 replica ball is an NFC chip. Upon scanning with an iOS or Android phone, users can access exclusive product information, competitions challenges and more.

It wasn't Adidas' first dip into the smart ball market, either. Their micoach Smart Ball provides players with access to data on shot power, spin, the point of impact and more, alongside relevant coaching tips to help improve technique. It's fair to assume the brand's next major tournament ball may make more of NFC integration.

Another advance we can look out for in future tournaments is a shift in how goal-line technology is employed. Introduced to the World Cup in 2014, it helps prevent footballing injustice and dodgy decisions from those who run the line.

Currently (and as in Russia), high-speed cameras are installed in the stadium, tracking ball movement and position. When the ball crosses the goal-line, a notification is sent to the referee's smartwatch within a second, allowing officials to make the correct decision and swerve controversy.

On the periphery is a different method, and it is another in which Adidas has led testing. In this approach, a magnetic field created via underground cables interacts with receptors inside the football, calculating and determining if the ref should award a goal. From here the process is much the same, with a signal sent to a wearable device. If this can be made more affordable, it's a much more accessible solution for football clubs of smaller stature, and could be the key to spreading goal-line technology beyond only the top tiers of the game.

Television screens were given a new lease of life at Russia 2018, with referees regularly drawing imaginary rectangles with their fingers before journeying over to pitchside monitors to review incidents.

More often than not, their trip would result in the flashing of cards and the awarding of penalty kicks. Though its introduction didn't wholly eliminate all controversy, there was a consensus that the system was an improvement, helping to reduce significant errors.

Fifa's World Cup VAR (Video Assistant Referee) team consisted of 13 officials, based in a Moscow headquarters. Four officials would monitor each game, with access to footage from 33 different cameras (eight of which are slow-motion recording cameras and two that are exclusive views offering angles designed to clear up offsides). On spotting an error, the VAR team contact the referee through an earpiece and advise that there is footage of a flashpoint available to review.

But while FIFA were bulk-buying screens for their Moscow HQ and football stadia across Russia, broadcasters such as the Fox Sports were doing their best to sway viewers away from the telly and into a virtual reality headset.

The 2018 World Cup was the first in which all 64 games were broadcast in virtual reality, giving spectators the best seat in the house. As well as offering different viewpoints from around the stadia, BBC even went as far as providing BBC Sport VR users with a virtual hospitality lounge in which they could enjoy the game.

Although the bow of VR viewings at the World Cup went reasonably well, there's a feeling that its still in infancy. With screen resolutions growing and the immersive technology becoming increasingly accessible in price, the future is somewhat exciting.

But if VR spectating is to become the standard, the most significant challenge to overcome will be in creating a more social viewing experience - another development to look out for in future tournaments.

Readers of our blog can look forward to finding out how immersive technology is set to change the game even further when we release a piece exploring the effectiveness of XR in sports training in the coming weeks.

AI would dictate what constituted a highlight based on analysis of all World Cup footage from as far back as 1958, before uploading to the highlight machine - which is also available as an app on Android and iOS.

In fact, before the World Cup had even kicked-off, over 300 past World Cup matches were online and available for analysis. Even more impressively, the machine allows customers to quickly create custom highlight packages based on what they'd like to see. So, if for whatever reason you want to watch every single shot Cristiano Ronaldo has had on goal in World Cup action, it's as simple as plugging that criteria in and letting it load.

It isn't the first time tech has looked like changing how we catch up with the matches we've missed, either. In late 2017, the lowly Frickley Town (who operate out of the eighth-tier of English football) hit the headlines when they introduced augmented reality to their match programme, allowing mobile users to flash their camera at the programme and access previous match highlights.

Their activity sparked interest from larger clubs, whose ears are pricked by the technology's potential to drive commercial revenue. Larger clubs (for whom broadcasting is no issue) are exploring how to use AR to improve experiences such as stadium tours and increase the value proposition for their premium media content subscribers.

Elsewhere, match footage is also making its way into the hands of club coaching staff. Though it has been a Summer packed with eye-watering fees in the Premier League, perhaps the most crucial arrival for teams will be that of technology in the technical areas.

The season of 2018/19 will be the first that management teams are allowed tablets in the dugout. Though potential performance-enhancers, they are far less controversial than their namesake as the devices will be used to enable coaching teams to access different viewing angles of the match.

Coaches and players are to be aided by the introduction of mobile technologies in the dugout. Picture: Jeffrey Lin.

Introducing iPads on the bench will allow coaching teams to identify patterns in play, and afford coaches the opportunity to talk substitutes through opportunities for them to disrupt the game.

Simple use of technology perhaps, but with AI already powering highlight packages, it's surely only a matter of time before teams get smarter. Similarly, the World Cup saw the introduction of Electronic Performance & Tracking Systems, where a dedicated app allowed team analysts, coaches and medical staff to monitor performance. We can expect these to be more closely linked with player wearables for improved analysis.

Of course, the use of apps and tablets isn't groundbreaking. But that the sport is finding more worthwhile applications of the technology is promising. With AI already powering highlight packages, it's surely only a matter of time before we see AI blend with the broadcasting of live matches.

With wearables, virtual reality and artificial intelligence all finding their place in football, the sport is rapidly developing as a breeding ground for useful applications of emerging technologies.

Football may have been behind sports such as tennis, cricket and rugby, where match officials were jacked up with beefy decision-assisting tech many moons ago, but outside the referee's room, the sport is streets ahead.

Though future developments like those listed above are exciting, an age-old question of ethics will almost certainly rear its head once more. While AI especially appears to be on the rise, it's surely only a matter of time before clubs begin to ponder the potential of AI and machine learning in tactical analysis.

If governing bodies aren't quick to act, a can of worms may be opened. There's no reason that in years to come the most intelligent coach in the game will be artificial. Whether or not that's a good thing is very much subjective.

Should AI should be welcomed in football and does it need to be governed? Share your thoughts with me and the team over on Twitter, @_Stej & @hedgehoglab.

Looking for more on how technology is improving sport? Find out how athletes are using virtual reality training experiences to make mental, physical and technical improvements...